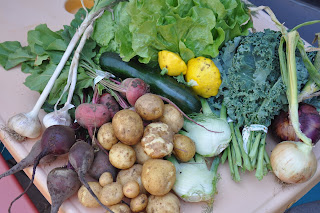 
Between my garden, the garden at work and the CSA I am up to my elbows in summer squash. This week I made a zucchini gratin with cream, garlic and Parmesan cheese. What's not to love. I also made some zucchini muffins from Martha Stewart's Baking Handbook, though I used cherries instead of cranberries. These had a pleasing sweet cinnamon taste and the zucchini was almost undetectable. I enjoyed them and I'm going to try them out with the preschool crowd next.

"Moon" potatoes are what I make for my oldest daughter. I'm trying to wean her onto standard issue roasted potatoes. I cut the potatoes in half and slice them, thus the "moon" name. Tossed with oil and salt and pepper, I roast them on an oiled baking sheet at high heat, turning over about half way through cooking. 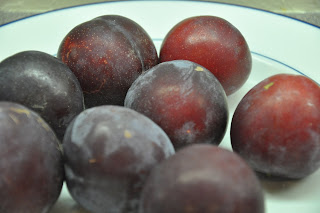 As usual, peaches are eaten out of hand in our house. While I'd like to make a cobbler or crisp perhaps, I'm looking for that pure peach flavor.

Plums, however, I don't really care for eating fresh. This week I made another batch of plum jam, this week straight up with some additional plums from my Mother in Law. I read somewhere that when you are boiling your pot of fruit and sugar, you should save the foam that you skim off and serve it over ice cream. I thought why not! After the jam was made and sealed I had moment to attend to my "foam". There was a layer of actual foam and a layer below that of sweet, tart plum syrup. This was well worth the small added effort. I ate it over a bowl of ice cream and peaches. Sweet, cool, rich and tart. Amazing! Too bad I don't have the photo with the plum syrup. 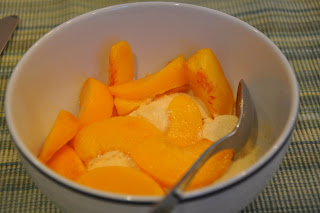