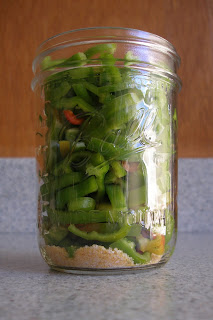 As I mentioned in my previous post, we've got quite a few peppers on hand.  Today Renee offered a few more, bringing the total Anaheim count to 18.  There's also a few poblanos, Corno di Toro Rossos, jalapenos and standard bells.

Anaheim peppers are those often sold as "green chiles" by companies like Ortega. Canning them was an option, but since we don't regularly use green chiles it was not a good option.

One thing we have used quite a bit lately is hot sauce.  Two favorites are Cholula and Tabasco.  How hard could it be to make hot sauce from Anaheim peppers?

Turns out, not difficult at all...

A quick bit of research pointed towards a basic formula that we adapted as described below.

Sterilize the canning jars and set aside to cool.  Meanwhile, prepare the peppers and bring the vinegar to a boil.  Add 1/2t salt and 1/2t granulated garlic to each of the canning jars.  Fill each jar with the sliced peppers, lightly packed.  Top each jar with the boiling vinegar, leaving 1/2 inch head space.  Seal the jars and process following the steps for canning high-acid food.

The pepper sauce should be ready in 3 weeks -- stay tuned.