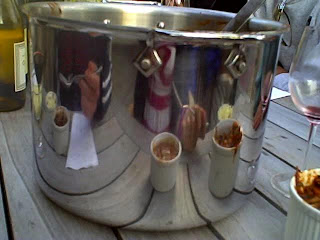 Tonight's the night we decided to get serious about testing chili recipes for the 28th Annual Palo Alto Chili Cook-off. We entered the vegetarian category under the team name "Yes VeGan!"

Alyce, our head chef, brought ingredients for a corn based chili. We compared that to the Whole Foods Market Chunky Garden Vegetable Chili recipe, with three Tierra Vegetables smoked TAM jalapeno chilis added. The goal for tonight was to narrow down the myriad of choices to a base recipe we can perfect between now and July 4th.

Here's Mike's and Alyce's recipe, as conveyed by Dr. Mike himself:

(Or, as Prince Charles would say, "Og, he sweat, he make ye sauce")

We made madelines from the vegan cornbread recipe from the Post Punk Kitchen, though won't go this far on competition day. The consensus was that tortilla chips were a better (we are salt fans), easier option.

As you can see in the videos included, there were preferences all around. Net-net, there are good qualities to be leveraged from each chili. The combination of the two was excellent. Over the next week we'll try and concoct one recipe from the two we started with, emphasizing the strong points of each. There's also the issue of how to cook on site; like the recipe, this too is getting some serious thought.

While we're not yet there, I'm hoping we get to simple. On game day, we'll have a few thousand people to deal with, so the recipe and the cooking needs to be easy. On top of that, we're hoping to have some fun -- maybe catch a bit of frisbee as the chili simmers. It all comes down to the judges...