Early this morning I finished planting our garden, including English shelling peas. A few hours later I stumbled upon a big bag of them at my local farmer's market. Recalling a Bistro Elan appetizer from springs past, I set out to create pea blinis on a bed of pea shoots.

I started with the blini, hoping to use both the buckwheat flour we had on hand and crushed, fresh peas. I found a vegan recipe for buckwheat pancakes that I adjusted slightly, halving the recipe, removing the sugar and adding roughly 1 cup of blanched, crushed peas. 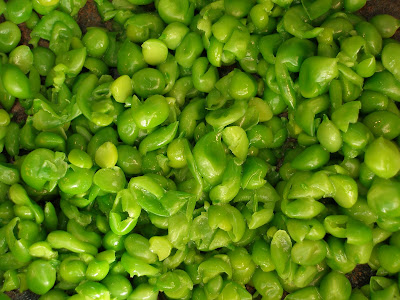 A site I discovered in my wanderings is worth noting: Pea Shoots. One recipes cited there, Pea Shoot and Walnut Pesto, gave me the inspiration for the vinaigrette, which used toasted walnut oil as the base. The final dish was a keeper. 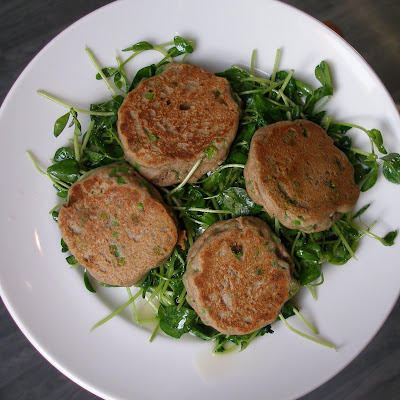 Heat pan over medium heat, brush with oil. Drop batter onto pan (I used a medium cookie scoop) and cook as you would pancakes.

Heat the walnut oil over medium heat. Saute garlic for a minute or two and add one half of the pea shoots (roughly .25 pounds). Saute till wilted, set aside. Combine raw pea shoots, wilted pea shoots and vinaigrette, mix well.

For the record, I never liked peas until I had fresh peas. If you have not had the chance, they are well worth pursuing. Canned peas, even frozen peas, are nothing like the real thing. I hope those we planted today grow forth and prosper!