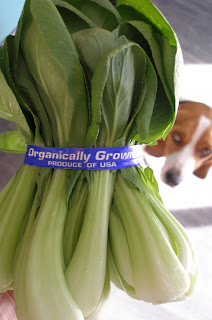 This week's box contains:
On top of this, Renee shared some beets, dill, cilantro, and some mystery greens she had on hand and as well as some purple green beans from her garden.

Dinner tonight included spelt pasta with green beans in dill pesto. I was never a fan of dill until I tried it pesto -- now it is my favorite pesto, bar none. For a fleeting moment, I thought I had a large bunch of dill in our box. It turned out to be fennel fronds. A quick bit of poking around on what to do with them showed they could be used as a dill substitute, so I'll give them a go in the trusty pesto recipe linked above. As there's so many fronds, I'm also going to dehydrate some for use in cooking later this season.

No telling what this week will bring, some research required. A few recipes I plan to try include: