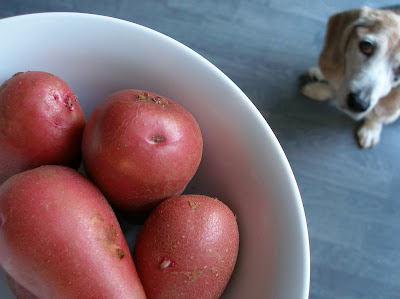 This week's box contained:
What caught my interest was the potatoes. Two types in this week's box and a third type still on hand from the box two weeks back.

I love eating potatoes. As you can see below, so does Sam. Having spent a few years in the low carb mindset, I always think twice when I get the urge. Potatoes are extremely versatile and can be amazingly satisfying, even prepared simply. But are they "worth" eating from the nutritional perspective? I did a bit of research...

Turns out potatoes are nutritious, sufficiently so that “Humans can subsist healthily on a diet of potatoes and milk; the latter supplies Vitamin A and Vitamin D.” [1] Potatoes are starchy, but their glycemic load is manageable, they are a good source of fiber, protein, potassium, vitamin C, fiber, and a bevy of phytochemicals. The urban legend about all the nutrition being contained in the skins is not true; most nutrients are evenly distributed throughout the potato. They are easy to grow in a number of climates. Not that one would thrive on a diet of potatoes and milk alone or would choose this path, but it should be no surprise that potatoes are heros in some parts of the world. 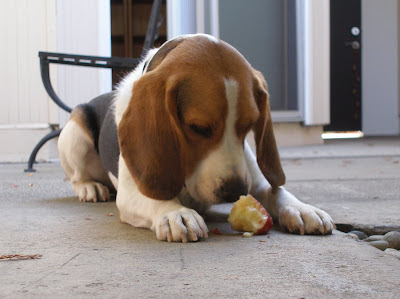 Interestingly, potatoes -- along with tobacco, tomatoes, eggplant, peppers -- are members of the nightshade family, which can be toxic to humans. It is true that green potatoes are poisonous, though you'd have to eat quite a few to feel any ill effects. Other interesting potato facts include:
Visit the following sites for more info on the mighty potato, including recipes:
Or the following books:

Needless to say, I decided to indulge. Lunch today was pesto potatoes, as follows:


Pesto Potatoes
Serves 2 as main, 4 as side

Preheat oven to 425f. Toss potatoes with salt, then olive oil, and spread on a parchment covered baking sheet. Bake for 20 minutes, stir. Bake for another 15 minutes and remove from the oven. Stir in pesto, mix well and enjoy! 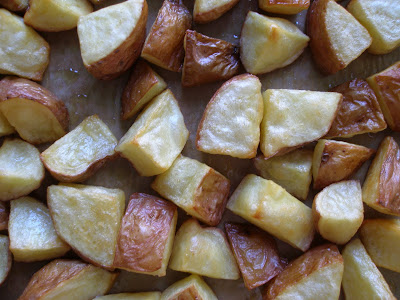 Email ThisBlogThis!Share to TwitterShare to FacebookShare to Pinterest
Labels: 2009, Vegan