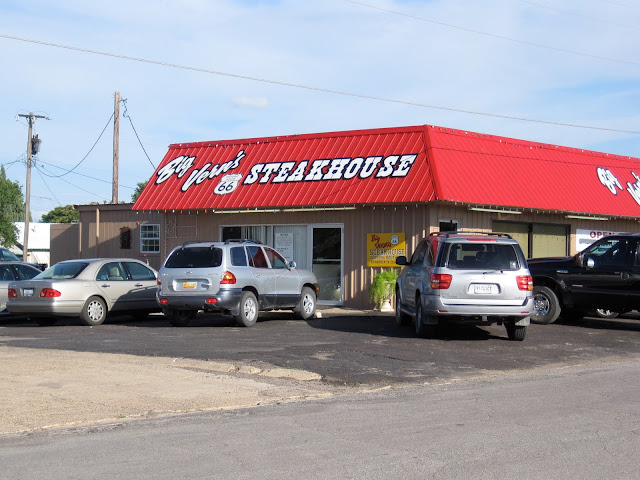 The breakfast in Albuquerque was nearly identical to the breakfast in Flagstaff.  The only difference is that Albuquerque offered tortillas in addition to the other bread products.  I am amazed at the lack of variation and the minute amount of local flair.


This morning, the only option for me, oatmeal, was not yet fully cooked so I headed to the market within the lobby to see if there were choices there.  No such luck.  I opted for an apple, an orange, and some oatcakes from the stash I brought from home. 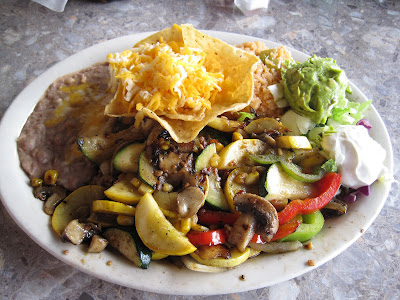 Lunch was really good.  We stopped at Jorge's Tacos Garcia in Amarillo.  I had a margarita and the "Tex-Mex Stir Fry", which consisted of zucchini, summer squash, bell peppers, onions, mushrooms and roasted corn sauteed then served with corn tortillas. After scooping off the cheese and sour cream, I was all set. 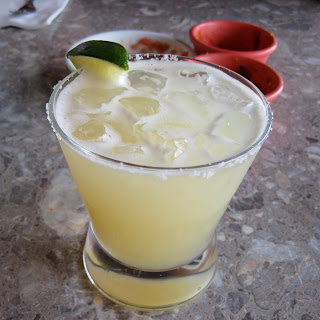 Dinner was vastly different than the last two nights.  We went to "Big Vern's 66 Steakhouse" just down the street from our hotel and pictured above.  I had a baked potato and a side of steamed vegetables.  Sean went for the ribeye, which by all accounts was better than average...

Today reminded me how hard it is to make good choices when it comes to food.  My preferences aside, if you're looking for a healthy meal (referencing the USDA's guidelines as an example) these buffets and restaurants don't set the average person up for success.   Of course choices infer you have options, which is another, very important discussion in its own right.

At home this week, the box contains:
Our good friends David and Marina are picking it up and will share their culiary adventures once complete.