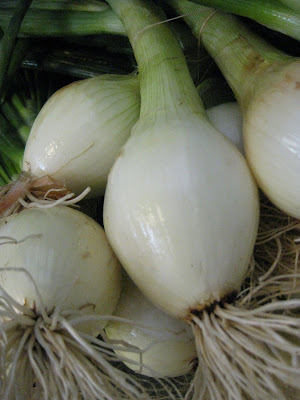 Toss zucchini, squash, onions, eggplant and peppers with salt, then olive oil to coat. Grill vegetables till nicely browned and allow to cool. Meanwhile, halve the tomatoes, mince the garlic and toss both with salt; stir periodically.

I'm not a huge fan of ratatouille no matter how many times I've tried to make it or had it made for me --even in Rome. Last night's dinner did not change that...

Dinner tonight, however, was a different story. We made two dishes based on the left over ratatouille: Pasta e Fagioli and Porcini Mushroom Tortellini.

The Pasta e Fagioli was a simple soup based on frozen, homemade vegetable stock. I thawed the stock, used it to cook the pasta and beans, then added several generous spoonfuls of ratatouille. At service we swirled in fresh basil-walnut pesto made from the basil we received this week. Seriously bellissimo! For the second dish, we added Muir Glen diced tomatoes (fire roasted) to the remaining ratatouille and used it for sauce to top store bought fresh pasta. Also really satisfying.

The strawberries are gone and the beets are now roasted, waiting for lunches this week. With all the greens (including the romaine lettuce) on hand, suspecting another round of basic greens, subbing smoked onions for the ham hock and the bacon.